Frank Ward, our endorsee for Austin City Council District 8 in the November General Election, has made the Runoff! Early voting goes through Dec. 7, with Runoff Election Day on Tuesday, Dec. 11, 2018.

Ward's momentum has been nothing short of impressive. In addition to a groundswell of support from Southwest Austin and incumbent City Council member Ellen Troxclair, Ward has gained the endorsement of the Austin Firefighters and the Austin Police Association.

With under 10,000 people having cast their ballots so far, Travis County Republicans have a real shot at swinging this election and saving our LAST REMAINING CONSERVATIVE SEAT on the Austin City Council.

Can you help? Visit www.WardforAustin.com -- consider a donation, block walking or phone banking.

Also included below is our press release from when the Travis County Executive Committee endorsed Ward:

Currently representing the Southwest Austin district is Ellen Troxclair, who announced last month she would not seek re-election for a second, four-year term. She voiced her support for Ward as her successor soon after her retirement announcement and his candidate filing.

According to Matt Mackowiak, Chairman of the Travis County Republican Party, Ward is the best choice to carry on the strong leadership tradition begun by Troxclair, who was not only the first representative of District 8 under the 10-1 plan but the youngest woman ever elected to Austin City Hall.

"Frank Ward wants to fight for taxpayers and his experience, vision, platform, and unwavering commitment to conservative principles has earned the unanimous endorsement of the Travis County GOP," said Mackowiak. "Austin is suffering from an affordability crisis that City Hall is not only refusing to make better, but actively making worse. Frank Ward wants to seriously address our out-of-control property taxes, rising city spending and will support sensible transportation solutions. We strongly believe that Frank Ward is the right choice for District 8 citizens who have faithfully supported Troxclair for these past four years. I would urge all Republicans in the city of Austin to directly support Frank’s candidacy to ensure at least one conservative will be serving on the City Council come January."

“I’m honored to have the support of hard-working Austin conservatives who love this city, but also recognize that, increasingly, there are numerous challenges to people’s livelihoods here that must be addressed,” Ward said. “The persistent rise in our property taxes is unsustainable and will continue to drive out families and individuals who contribute much to Austin’s vibrancy and want to remain in our city. The way to deal with an affordability crisis is not to push for hundreds of millions of dollars in new bond spending on the backs of middle-class families or to maintain expensive, time-consuming, and unnecessary bureaucratic red tape that harms individuals and small businesses. Ellen has fought hard to change the status quo in Austin; I will do all I can to continue building on her important progress on behalf of all Austin taxpayers.”

Ward lives in Circle C with his wife, Marion, and their three children. He is a Partner with Austin-based public affairs firm, The Mach 1 Group, where he serves as Vice President of Client Services. With a Master’s degree in Government from Johns Hopkins University, experience working at the Export-Import Bank of the United States—as well as a record of dedicated service in The White House, the U.S. Senate, the Republican National Committee, and the Texas Capitol—Ward would also bring experience as a small businessman to the Council dais. 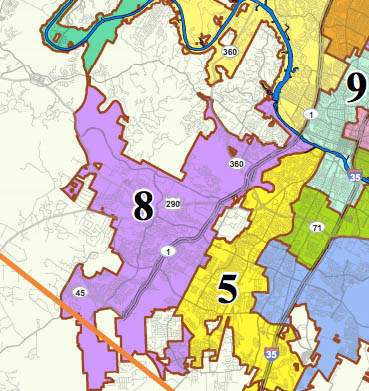