We're bigger than that! 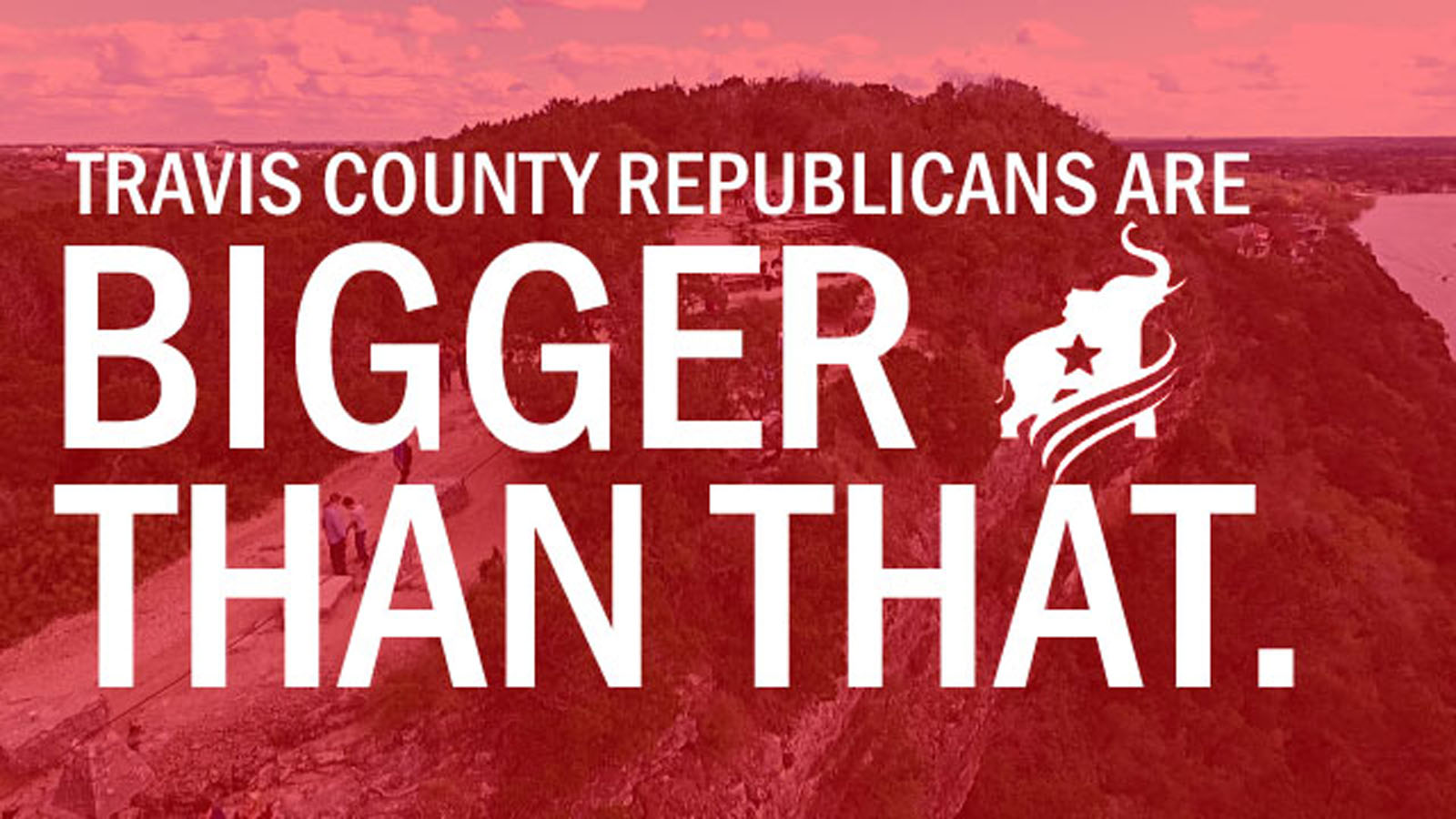 Our party resources are secure.

There are more checks and balances in place.

There are more people involved in the leadership process.

Enthusiasm for the Travis GOP is at a high point.

Our "Bigger Than That" initiative helped turn things around when the international media was ready to dig our grave following the March 1, 2016 Primary! The grassroots leaders of the Travis GOP valiantly stood strongly together against all odds, kept the county party fully functional, and brought back order well-before the General Election. Read more below about the rebuilding of our party finances and our reputation with the community. It's quite a turnaround story.

By now you've probably heard all about our infamous county chairman election on the March 1, 2016, Primary ballot. If you haven't, then please see this short five-minute video about the winner of that race, or read this thoughtful analysis on our sister media project.

All of the public curiosity and media attention generated has resulted in a barrage of questions -- some designed to detract from our goals to make the Austin-area more affordable and friendly to individual liberties, while other inquiries are sincere.

But the answer to almost all of these questions was summed up by a simple phrase:

"We're bigger than that!"

Like the ruggedly independent Central Texas conservatives we are, we didn't lay down and lick our wounds while our detractors laughed at our misfortune.

Rather, we pulled ourselves up by the bootstraps and came up with an expertly crafted plan to turn this controversy into a positive for Travis County.

Our plan to build the Travis GOP into a stronger volunteer-driven force for good in the Greater Austin area is a constantly developing process. But for starters, under the new 2016-18 Bylaws, we have a five-member Executive Steering Committee that is determing the new direction.

The Steering Committee is meeting monthly and when necessary.

All property -- physical and intellectual -- was temporarily transfered to a related organization for safe-keeping. The Steering Committee controls the Friends of the Travis County Republican Party organization, but has recently returned holdings back to the county party.

Our inaugural "Hero Night" fundraiser helped to replenish party funds, as well as donations brought in James Dickey prior to re-taking office.

Below are some answers to some commonly asked questions.

Click here for some thoughtful analysis from the Austin American-Statesman's Jonathan Tilove.

"How did you get anything done with a chairman who didn't support your goals?"

We're bigger than a single elected official. We're truly a "big tent" of thousands of volunteers dedicated to turning Travis County red and making Texas redder. And we made several changes to our bylaws to empower the members of our party and take things to the next level.

"Your chairman wielded significant power and had the potential to hamstring the Travis GOP for two years. How did you navigate through that?"

We're bigger than interpersonal squabbles. Our then-chairman said he was willing to do whatever he could to let the executive board lead the party in most respects, while performing his statuatory duty. He has said that he mainly wanted to have a "bully pulpit" to announce his viewpoints. We're big enough to take a man at his word and work together with our duly elected chairman for the common good of our county party.

"Was Robert really that bad of a chairman?"

See above. We were big enough to work together despite the controversy. County Chairman Robert Morrow was cooperative in the two months he was in office. He moderated the inaugural executive committee meeting well and oversaw the organization of the county party for its new term. We are grateful for his support! However, the public relations hit the party took from his outlandish comments and stances drained our time and finances. Something had to be done.

We're bigger than dirty tricks, and did nothing to defy the direction of the voters (no matter how misinformed they were) nor did we expend any powers that we did not actually have by simply throwing him out. Ironicaly, it was Mr. Morrow who removed himself by filing as an independent (read: not a Republican) write-in candidate for President of the United States of America. Before and after this move, we secured legal counsel and determined Morrow was ineligible to serve as county chairman. A special election was called for Sept. 20, 2016, in which the Precinct Chairmen of the Travis GOP selected James Dickey to succeed Robert.

"You've taken quite a hit in the media and in the public eye. Why did you not quit and come back two years later when the coast is clear?"

We're bigger than one person's antics. No, we weren't happy with Morrow's infamous objectivication of women or wild accusations of wrongdoing in high places, but everyone knows that those views do not reflect the values of the 99.99% of us who have respect for the opposite sex and believe in making a practical difference in politics. He's entitled to his opinions, and we're obliged to strongly disagree. As a matter of fact, we officially censored him in advance of his taking office.

"But his rambling makes every one of you look bad individually. How are you going to save your reputations?"

We're bigger than a few unorthodox rambles. The new chairman said some odd (and, frankly, very offensive) things, but those things are not in our platform and are not what we officially believe as a body. His views were not binding on any one of us. They are his opinions alone. However, this did not stop the mainstream press from focussing on his rambles.

"How will the Travis County GOP ever recover from this?"

We're bigger than a public relations hit. We've been the smaller of two parties in Travis County since just after the Civil War! We're by no means deterred by unfavorable press coverage (while very appreciative of the sympathy we've received from many local reporters), and are more committed than ever to our mission and core values. We stood firm. Now is the time to rebuild.

"What about your donors?"

We're bigger than even the Travis County Republican Party. We set up a separate entity, Friends of the Travis County Republican Party, to safeguard party funds and property for as long as it took. We have now returned that property to the county party. Our generous donors should know that we're committed to safeguarding the funds entrusted to us and using our resources to make a measurable difference. We are committed to fully supporting ALL Republican candidates and officeholders, and will never take sides in an intra-party contested Primary.

"Didn't you run out of money? The whole Republican Party is imploding!"

We're bigger than a low bank statement. We were concerned, but not paralyzed by fear. We are confident the extra attention we were given will result in a record-setting fundraising events in the near future. If you would like to help us replenish our funds please DONATE HERE.

"Why did you reverse the will of the voters by taking away the chairman's power?"

We're certainly bigger than that, and would never think of attempting to reverse an election (if that were even possible)! The Chairman position is given some authority and responsibility in the Texas Election Code and the Republican Party of Texas rules. All other authority and responsibility the Chairman has is what is granted by the Executive Committee. Every two years the Executive Committee, which is made up of elected Precinct Chairs, is required to develop the bylaws that determine how much more responsibility they will delegate to the Chairman and/or other officers. They did just that, and now Chairman Dickey has a Steering Committee to help make important decisions.

If you would like to know more about what the Travis GOP is doing to expand the power of the grassroots, please contact Communications Director Andy Hogue at communications@travisgop.com.

Please help us spread the word! Consider sharing one of the below images via social media (simply right-click and select "save image as").

(By the way, that's Mt. Bonnell in the background, the highest peak in Austin. We figured there's not much "bigger than that!")